Welcome to Don’t Play Yourself, a weekly column dragging the rich and famous for embarrassing themselves. Every Friday I’ll collect this week’s players and decide how thoroughly they played themselves.

In this inaugural edition, the previously unknown-to-me Kate Upton lands on my radar, Ivanka Trump finds a nemesis in Cosmopolitan, Hillary Clinton takes on the Basket of Deplorables, and Kid Cudi kicks off the most boring rap beef ever.

This is unacceptable. You should be proud to be an American. Especially on 9/11 when we should support each other. https://t.co/qFozwaH9Bu

Protest&speak ur mind whenever u want but during the 120secs you should support the people who protect our freedom. https://t.co/qFozwaH9Bu

Read my Instagram post. They have every right and SHOULD protest just not during those 2minutes on 9/11 https://t.co/ecBMmUifnw

Sorry I wasn’t clear. Never during our national anthem. Especially on 9/11 #NeverForget https://t.co/UEDIsqbXEr

Uh…huh. Thank you, Katherine, for enlightening us all on the proper protocol for protesting. and reminding us all of the importance of blind patriotism and, of course, pleasing you.

Before Upton added her voice to the chorus of white people indignant about black football players exercising their constitutional rights, I had no idea who she (model, bad actress) was. But it wasn’t a leap to assume that, despite running to scold US citizens for not being “proud” enough, Upton’s never managed to have an opinion on police brutality. Just to be sure I checked her timeline after the recent killing of 13-year old Tyre King. Shockingly, Upton had nothing to say about it and probably never will.

I’m sure Kate Upton lives a very busy life veering out of her lane, but if she can make time to tweet all this nonsense and write an Instagram caption no one asked for, she has time to educate herself. Girl, instead of policing everyone else’s patriotism why don’t you go talk to your uncle–who blocked a bill for 9/11 first responders three times–about his. It takes a special (but not uncommon) kind of stupid to demand we never forget 9/11, but during the national anthem, especially on 9/11, forget that America’s cops often shoot and kill its citizens without cause.

Did Kate Upton play herself? I feel like I got played paying attention to another mediocre white woman being determinedly ignorant. Meanwhile Upton will probably fade into attractive white lady obscurity again soon, her reputation only damaged among people who didn’t care about her to begin with.

“So I think that you have a lot of negativity in these questions,” said Ivanka Trump in an interview with Cosmopolitan, easily replacing “I would like very much to be excluded from this narrative” as my favorite perfectly pointless phrase of 2016.

The interview was about the maternity leave plan proposed by Donald Trump, Ivanka’s bigoted father and presidential candidate, but as soon as Ivanka was asked a couple followup questions about the plan’s lack of paternity leave and her father’s previous comments about pregnancy being “inconvenient” for business, she drifted right off the rails and left the interview with an abrupt, “I’m going to jump off. I have to run. I apologize.”

Can’t you just hear Ivanka? Her measured, snooty tone taking on a bite in response to perfectly reasonable questions about her father’s so-called “policies”? Can’t you see her laughing airily (I envision a hair flip of some sort) while trying to disguise her agitation that people know her father is dirt? On the other end she was probably gesturing wildly and demanding to know how she got saddled with Prachi Gupta, my hero, when she was expecting Matt Lauer or Jimmy Fallon.

Just to make this even more confounding, Ivanka took to Twitter after the interview went live.

3/3:@Cosmopolitan, your readers do & should care about issues impacting women & children. Keep the focus where it belongs—advocating change.

2/3:Regardless of who you support, policies benefiting women+families are becoming topics of mainstream conversation & that’s a good thing.

1/3: Politics aside, I’m working to raise awareness on issues that are of critical importance to American women and families.

First of all, I’m alarmed that she doesn’t know how to number her tweets (why doesn’t she get chronology?), but what point is she trying to make? That Cosmopolitan was unfair to her by asking questioning her father’s policies? That they were standing in the way of change by holding the Trumps accountable? Yes, Ivanka, some people do have a vested interest in making sure your father doesn’t take office and fuck this country up more than it already is.

Did Ivanka play herself? Naturally. I’m sure Ivanka went into that interview expecting it to be fluffy (because it’s a woman’s magazine right, Ivanka?), but she agreed to it, showed up for it, and made herself look stupid doing it.

The Basket of Deplorables

You could put half of Trump’s supporters into what I call the basket of deplorables…The racist, sexist, homophobic, xenophobic, Islamophobic — you name it.

YAAAAAAS, Hillary, you’re finally appealing to the rest of us! And you didn’t even have to compare yourself to anyone’s abuela! Right after Hillary dropped this truth (but she should have said “all”), the Basket of which she spoke mobilized with the intention of getting their revenge by….proving her right. Bigots usually try to prove they aren’t bigots by being bigots, but the Deplorables took it a step further and pushed back against Hillary’s characterization by embracing it fully. Social media handles changed to “Deplorable Bob” and “Deplorable Janet”, not to mention these gems: 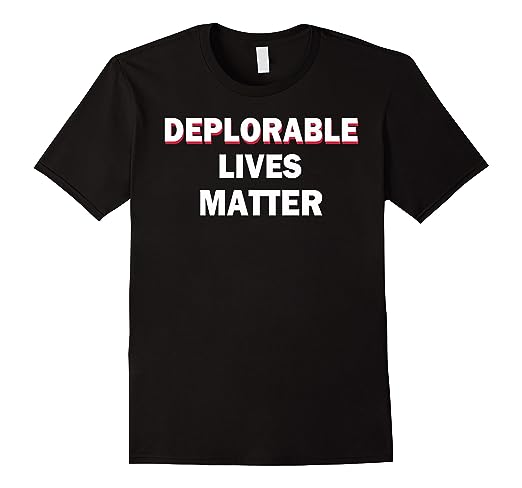 This is peak Deplorable.

Thank you, Deplorables, for making yourselves so easily identifiable to the rest of us. It helps. I lowkey hate myself for having to google “Deplorable t-shirts” to find that image.

What the Deplorables haven’t realized is that even after Hillary’s fauxpology, she’s sprinting with “deplorables”. Though some people (probably racist people) are treating Hillary’s remarks as a gaffe rather than the objective truth, it’s unlikely she lost any support she didn’t already have. She’s more likely to gain voters now that the Trump campaign, including vice presidential candidate Mike Pence, is doing Hillary’s job for her.

Did the Basket of Deplorables play itself? It may be more accurate to ask if Hillary played them, but either way

I need yall to know I got so many haters within the industry and these clowns know Im bout to crush their entire existance.

Everyone thinks they’re soooo great. Talkin top 5 and be having 30 people write songs for them

My tweets apply to who they apply. Ye, Drake, whoever. These niggas dont give a fuck about me. And they aint fuckin with me.

I guess it’s a rapping thing, but people get all up in their feelings about not writing their own material. But if Beyonce is fine with people writing for her, everyone else can be, too. I’m clearly in the minority since Kid Cudi ruffled some feathers after going on a Twitter rampage (which I’ve shortened in the interest of not being here all day) calling out Drake and Kanye West for their teams of writers (Cudi cowrote four tracks on Kanye’s 808s & Heartbreak) and supposedly being disloyal to Cudi.

As far as rap beef goes, this one really should have been better than it was. Cudi got the ball rolling, cueing the inevitable responses from Ye and Drake, but when they came, they left a lot to be desired.

Kanye West’s response to Kid Cudi’s tweets at the #SaintPabloTour in Tampa pic.twitter.com/eKx35X4kw2

This was almost good. It started off well enough with Kanye reminding Cudi that he signed him to G.O.O.D music once upon a time, but it really should have ended there. He ruins it by trying to play the racism card with Cudi (“we’re two black men in a racist world”). Excuse me, Ye, I thought racism was  “a dated concept“. Please don’t try to feign wokeness now that Kid Cudi is putting you on blast. For Black Jesus Christ’s sake, you pal around with Vanessa Beecroft  (aka Painfully Racist White Woman #9909765), and have yet to stop begging white people to validate you and your “art”.  And wearing skinny jeans first? You can do better. Between this and the VMAs (I’m never getting that time back), maybe you should hire a speechwriter. Or Kid Cudi.

Though Kanye was disappointing, he at least came through in pure Kanye-ness. Aubrey Graham, however….

Kid Cudi says you don’t write your own stuff and you come out to prove why you can’t? Drake, where the hell was Rihanna? You couldn’t ask for her input? The Queen of the Clapback never would have let you embarrass yourself this way.

Did Kid Cudi play himself? Nah, he said his piece and left it alone. Hopefully he won’t feel the need to respond to these tepid clapbacks unless it’s to point out how weak they were.

Did Kanye play himself? Kanye is always playing himself.

Did Drake play himself? Of course he did. He said, “Cud-itttt.”

Think twice before you tweet: social media influencers are real people too
How witch culture is being appropriated into feminism and why some witches aren't happy about it
I'm exhausted by everything on my phone - but I can't look away
World Hijab Day makes me very uncomfortable