History shows us that supernatural speculations by humans have consistently been achieved centuries later through scientific advancement. We cure diseases with “potions”. We learned to fly. We can access the entire world through our pockets.

Some of us still have the cynicism that things we think of as magic today — time machines, invisibility — will always remain magic. But because science is ever-progressing, one of our greatest fantasy genre wishes is coming true: Harry Potter’s invisibility cloak.

To understand how invisibility is possible, we have to understand visibility. All that our human eyes see is possible due to light waves. However, visible light is only a fraction of the electromagnetic spectrum.

The electromagnetic spectrum is made up of waves, ranging from short wavelengths (gamma rays, x-rays) to long wavelengths (microwaves, radio waves). Visible light waves are somewhere in the middle. They don’t look “wavy” to us because they’re measured in nanometers, which are one billion times smaller than meters. We also don’t see the wave as it’s traveling because the speed of light is up to 300 million meters per second.

When light waves move around, they hit an object and are either absorbed (taken in) or reflected (bounced off) by the object. The reflected waves travel to our eyes and we interpret them as color(s).

Light waves pass through things in different ways. When they bounce off a surface and come back to our side, it is called reflection, like in a mirror. Refraction is when waves change direction if they pass from one medium to another, like from air to water. Because water is more dense than air, any light wave passing from one to the other will change speed and bend. Have you ever noticed that a stick in a pool of water seems bent?

Reflection and refraction aren’t the only two ways waves can move around. There are many more properties of waves that change the way we see. 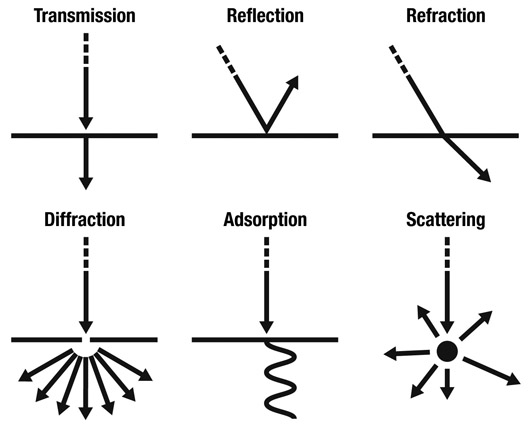 Even more, we manipulate light waves all the time: eyeglasses, contact lenses, magnifying glasses, microscopes, etc. These tools bend and spread light, making the image bigger and/or clearer. But glass, the most common lens material, is not good enough for invisibility.

So have we created an invisibility cloak?

In invisibility cloak research, scientists use metamaterials, which are artificial, to try to succeed in this refraction feat.

The first successful experiments were published in 2006 in the journal Science. Scientists passed microwaves around an object covered by a cloak made of metamaterials, making it seem as though the object were never there. However, because this was done with microwaves, which the naked eye cannot see, making visible objects invisible was still a few steps away. We weren’t quite there … yet.

This past July, Scientific Reports published a paper detailing their use of a cloak composed of seven superthin layers. Each of these layers had different electromagnetic properties, so when light waves hit them, instead of scattering in different directions, they were arranged in a way to conceal the coat completely by making all curved surfaces appear flat. This version worked better with larger objects and more irregular shapes.

And most recently, on August 2nd, a publication in Applied Physics Letters became a game-changer. The researchers used a new metamaterial called germanium antimony telluride (GST). Previous experiments used metals, which tend to absorb light and get damaged more easily. GST is a phase-change material that’s structure can be “switched” by light. And when it is switched, the light refracts differently. This was successful with both infrared waves and the visible light spectrum itself – a green laser successfully “switched” the surfaces and blocked light waves, turning the object transparent.

With that kind of accuracy, the real invisibility cloak will totally be foolproof to Malfoyesque antics, with no disembodied Harry heads popping out.

Cloaking devices still have a long way to go before we’re buying them at our local Madam Malkins — er, Bloomingdale’s. But the significance of a step like this cannot be understated. Scientists are constantly challenging what is possible, and with invisibility we have yet another example of magic-turned-reality.

I'm a dual citizen, does that give me the right to vote in both countries' elections?
My razor-sharp eyeliner cuts through the way you shame me
Meet Nadia Alawa, the founder and powerhouse behind the international NGO NuDay Syria
The history of non-binary genders is longer than you know