Dalia Mogahed is an American Muslim scholar. Currently, she is the Director of Research at the Institute for Social Policy and Understanding (ISPU) and the President and CEO of Mogahed Consulting, a consulting and executive coaching firm that specializes in Muslim societies in the Middle East. Formerly, Mogahed served as the Executive Director of the Gallup Center for Muslim Studies – which provided data and analysis to reflect the views and beliefs of Muslims across the globe. She also helped co-write “Who Speaks for Islam?: What a Billion Muslims really Think” with Professor John Esposito (Georgetown University).  Most notably, Mogahed served as an advisor for U.S. President Barack Obama at the White House Office of Faith-Based and Neighborhood  Partnerships.

The Tempest had the opportunity to speak to Mogahed about her work, projects, upbringing, and more.

The Tempest: Tell us about yourself in your own words and one thing people assume about you that isn’t true.

Dalia Mogahed: I am someone driven by the way my life has unfolded, rather than someone who has driven my own life. I really do feel that I have been responding to the terrain and how it changes, and I’m doing my best to reach my goal. I don’t feel like I set out to be where I am now – I didn’t set out a plan and execute it. I admire people who do and know how to do it, but I am grateful for the series of serendipitous events [that have led me here]. The thing that people think about me that isn’t true is that I’m focused, driven, and had it all planned out from the beginning – that it’s all a grand strategy, from the beginning. That isn’t the truth.

Your work has focused around the American Muslim community throughout your career. How has your experience with the community evolved and grown throughout the years? With your recent growth in the greater media space, how do you think that will change the work you’re doing?

The way that the community has evolved has been inspirational: we’re not debating moon sightings and halal meat anymore. We’re debating government on countering violent extremism (CVE). The debates have changed, and that’s a sign of a more sophisticated community. I can’t predict very easily where others land on those debates, [but they have] become more subtle and realistic – tactical. We have similar goals and different strategies for how to get there, and that’s the debate – rather than debating the actual goals. We’re speaking about things that we should be debating, rather than debating things we should have debated a thousand years ago. I don’t think it will change my role a lot – or at least I hope it won’t. I hope it’ll give me the opportunity to do more [of] what I have been doing, which is to research and share the viewpoints of ordinary Muslims. The more I can reach ordinary people about Muslims with the message, I don’t see my work slowing down.

Are there people I admire in the space? Yes – people like Linda Sarsour, who is so sincere and dedicated to her work and really walks the walk. And I think that’s such an important trait that everyone should learn from women like [her and] Suzanne Barakat, who was put in the place [of] being a public spokesperson from [being a] private person during a difficult time in her life. Suzanne finds the strength to continue to do this, even though this wasn’t the role she asked for. She does it completely out of the will to serve, and I think that’s incredibly admirable. It’s something I really look up to and respect.

There are so many more women I can’t even begin to name. I am really inspired because I feel like, at no time in my life, did I have so many amazing women to call my peers and my role models, or people I would be honored to mentor. It’s never been this rich of a landscape of up-and-coming leaders and [current] leaders who are doing amazing things. I believe it’s a trend that continues to grow and I’m hopeful about the role of Muslim women in America.

How did your childhood influence your career decisions, and is there anything you wish you could have done differently? 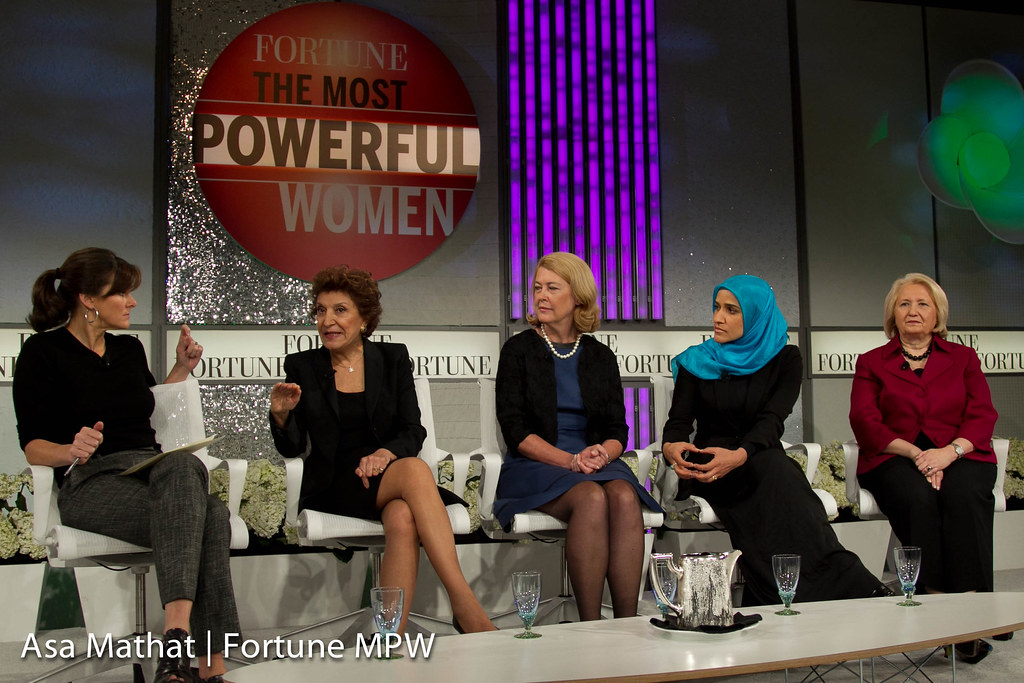 My career decisions were in spite of my childhood. I had a very traditional upbringing as an immigrant, and I was encouraged heavily to do engineering. I was very discouraged from public policy work that was deemed risky or dangerous – my parents just wanted good students. My sisters and I were very good students in school. But, for me. it was activism, and I’ve been working on Muslim issues since I was 17 years old or younger. In college, I did a lot of activism outside of my engineering degree by writing in the college newspaper and starting organizations and other things. I always did it in parallel with typical Egyptian expectations of girl. Then I was able to marry the two sides – the research skills, the hard science, the solutions science – and marry it to the topic area of which I’m passionate abut. My background in the hard sciences is helpful to me right now. Even if you start out in one area, it doesn’t mean you’re going to stay in that field forever. You can transfer that into whatever you’re passionate about.

What’s your advice to young women like you looking to get into the work that you do?

My advice is do a lot of writing. Read and write, read a lot – about this topic – and then develop an original voice. Be a critical thinker, an independent thinker. Don’t ever think you have to compromise your identity to succeed. Success will find you. You don’t have to bend over backwards to succeed. Set your sights on the destination of where you want to go – and that destination will be to serve God. It won’t be a path you necessarily imagine, but you will find it and you will get there.

Meet force of nature Haben Girma, Harvard Law School's first deafblind graduate and fearless accessibility advocate
The Internet's love of black slang makes some of us uncomfortable
I have a law degree but my life did not end up like Suits
The real history of Valentine's Day is pretty gory